Also this year the LADA-NIVA-IG Deutschland called for a reunion to the 20th International Lada Niva meeting in the off-road area of the Fursten Forest in Fürstenau. Our „Schoko“ and his „Helfergäng“ already prepared from Thursday morning on how to hang up banners and pennants, divide the place accordingly and shut off and build the Niva tournament. The marquee and bar were also during the day. There was also a layout plan along with a one-way regulation, which some still had to practice 🙂 Slawa’s sales stall including two vehicles and also some demonstration vehicles (Niva and Vesta) of Lada Automobile GmbH have already been set up accordingly.

Over 120 Nivas of different model variations and individual conversions from Norway, Switzerland, Belgium, Netherlands as well as Austria and of course Germany followed our call. Even some Lada car drivers wanted to be there – after all, we are a big Lada family! According to the motto „Ladafahrer are so cool, they do not need air conditioning“, many participants, despite the prolonged heat, took the sometimes very long way to be (again) among like-minded people. The most impatient participants arrived on Thursday! Our Norwegians had even arrived on Tuesday and first spent a few days in the Fürstenau area. Our Austrian friends also had a good enough 12 hours and more. After my own 8-hour drive with André and Erik, I was not motivated to build anything except the camp. Of course, there were still the first conversations and so you let the day end comfortably until the night.

On Friday, either way, it did not work out sleeping … so at times the registration pavilion and the 4 flagpoles could be set up. With energetic support from André, Karina and Clemens the registration was set up and set up, the welcome bags were filled (the anniversary cup was the best!) And the first participants were ready to go. Thomas helped me with the registration until late in the evening, because the last visitors came around 21:30.

We also drew our attention to our fundraising efforts for our two aid projects related to the upcoming South East Europe’s Balkan Express Adventure Rally Est By Sac, to the 3 of our members (Max, Uwe and Joachim) with a 2101 and 21044 LADA at the end of August will participate. Many took advantage of the off-road terrain on Friday so that some of their Nivas could finally be carried out in an appropriate manner. Yes it is! If a Niva drives only on the road, it can happen that he resents this in a different form and only showed his best side in the field.

Since our Austrian friends wanted to use the beautiful day for some culture, since they did not want to go to the grounds anyway, they went for a long walk in the town of Fürstenau and admired the regional architecture, vintage cars, parks and some museums.

Due to the long-lasting heat, there were probably not too many deep mud holes, because so nelst dirty the Nivas somehow did not come back, as it is known from the other meetings ago. The trial course was also set up for Saturday. The square was filled gradually and also another sales booth (AET Handels GmbH) was built. Also on this day it had been hot and it was drunk a few liters of mineral water – the literally „outwardly“ simply evaporated. Many a dog used the paddling pool in the Niva tournament field to cool off! But in the evening it should be more bearable again and thus there were many comfortable discussions.

On Saturday there was a lot on the agenda in the truest sense of the word … We were able to welcome Mr. Trzaska and two employees of Lada Automobile GmbH as well as the factory representative Alexander Ledkov. At the official welcome, I was also able to thank Mr Ledkov on the occasion of the 20th Int. Lada Niva meeting to present a present as a thank you for the now long-term cooperation with ПАО АВТОВАЗ. Unfortunately, we had to announce that unfortunately our IG veteran Manfred Adelmann was unable to attend this jubilee meeting for health reasons. The recovery in this case, the passion for the Niva nunmal unfortunately before 😉 Later also met Maria Vola on the site. She is a former employee of ПАО АВТОВАЗ – at that time responsible for the development of the brand LADA in the EU. She is now also involved in the German Niva fan scene and luckily could set it up as a day guest to look over.

The Nivas drove into the area and 10 riders dared to participate in the trial. Sabine and Michaela also accepted the challenge, and Sabine even had to prove her skills with a foreign Niva and was not that bad 🙂 Michaela also got good grades and with a bit of practice it will be the next time better 🙂

There were also minor technical defects on the vehicles here and there, some electrics had probably not liked many a water hole and then went on strike! But there were enough hard-working helpers so that the vehicles could be made roadworthy. But nevertheless, there were two ladies who felt in their element and the meeting-shirts bought for themselves „cut off“ according to the claim of a Niva-woman of today – I mean, this they have done excellently 🙂

In the late afternoon, although a dark front was on – the weather forecast announced thunderstorms – but Peter meant something good with us. A small rain shower and short gusts of wind kept us up to speed, but they also passed so that the award ceremony and the raffle could take place as planned.
Prizes were awarded for:

At the raffle many nice and useful prizes were raffled like exhaust sets, inspection sets, clothing, wind accessories and center console and much more! Also the test week vouchers for three different LADA models were won with enthusiasm! In a short break, the image presentation was prepared and Dimitri Schwab was able to show a selection of pictures from last year’s tour from the Niva meeting in Kallinchen to Togliatti to the 40th anniversary of Lada Nivas and report on it. It was then entertained extensively, but you could tell, that many early went to bed, because on Sunday it was unfortunately back home.

After getting up last Sunday morning, I felt a lot of movement. Everyone was gradually packing. Of course I was one of them and had to hurry extra, because the whole IG equipment had to be dismantled and packaged as well. Fortunately, there was support from Karina, Clemens, André, Sebastian, Markus and some more, so that I could leave with my team promptly. Many were already gone and you could not say goodbye to everyone – but that’s the same every year, somehow 🙂 And so we started the journey back home without any complications in the 5-passenger convoy. For our Eberhard as well as Clemens and Karina, the ride home unfortunately looked a bit different. Both Nivas unfortunately remained on the track. At Clemens, only the torn retaining bolt for the transfer case was to blame, which could be fixed in a nearby LADA repair shop on Monday, even if a VESTA rental car was practically already available. Eberhard was doubly unlucky, not only that his Niva did not want anymore (hole in the exhaust tract and then somehow water problem), but also the towing vehicle with a cracked V-belt also went on strike – consequently two more unlucky birds were subsequently „lent“ 😉 But ultimately are all back home well arrived and that’s the main thing!

In summary, I can look back on a great meeting with great and this time many new faces, which I hope to see you soon! Many thanks also go to the operators of the Fursten Forest, in particular to Ms. de Roo as well as to the many helpers and sponsors, who should also be explicitly mentioned here:

And as you all know, „After the meeting is before the meeting!“ – The first preparations are already running !!!

With the best NIVA-driver regards
Your Tamás

Here are a few more links around the meeting: 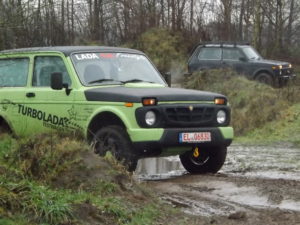 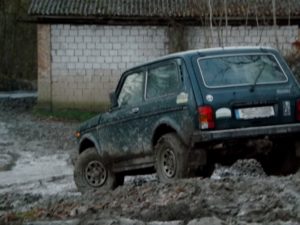 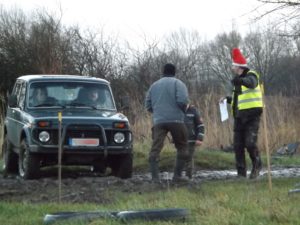 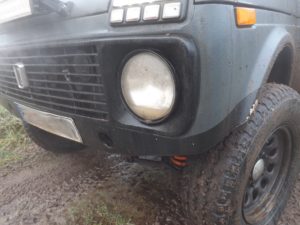 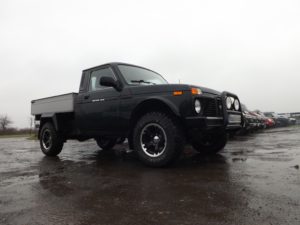